We began our series of “God’s Forgotten Word” by pointing out that they had a time in Jerusalem where they had lost sight of the Supreme Creator. This brought the young Judean King Josiah to a change by restoring the service of the God of the Bible again, even though the people of Judah did not know what really constituted such a service.
The knowledge of their God was largely lost, and what remained were only good intentions.

Today there no longer seems to be so much of God’s knowledge and some people may indeed have good intentions, they seek to integrate the many human and local customs in their service, which is not consistent with the wishes of God.
Also the majority of professing Christians holds on to the human traditions and keeps on fixing their eyes on Jesus Christ as their god, rather than to come to realize that Christ Jesus is the one sent from God, the Son of God and Son of Man.

This Son was announced well in advance and came to earth 2020 years ago. Provided that 20 – 20 is a special number and there have passed two millennia in which faith in Christ Jesus could be redistributed, this new season and church year we look for that special event.

On our ecclesia website we will elaborate on the announcement and the events surrounding this birth of the promised one to whom the whole world had to look out for, rabbi Jeshua, God’s prophet Jesus Christ. There and here we will try to understand how Jesus fits into God’s plan of redemption and why that divine descendant does not necessarily should imply that Jesus is God. Contrarily, a god who so many centuries after the fall would later come on the earth to ‘pretend’ he was tempted (when He cannot be tempted) and to ‘pretend’ death, would only reveal a grim hard and not compassionate god, certainly if he allows humanity still to suffer.

It is true that this son of God 2020 years ago came here on earth. He also knew God’s love for mankind and also shared this love with those around him. This sent one by God, in a special way, placed in the womb of a young woman, could feel compassion for a sinner who was “deceived by the sin“, but fierce invective against religious leaders who deceived the people entrusted to them and who were only on selfishness or pride and self-righteousness.

Even today we still see situations like Jesus could see them in his region. As there where spiritual leaders who brought the people some stories and demanded things from the people that God never desires of man, so do some church bodies still in  similar cases.

When Josiah decided to restore the temple of God came forth the Moses Code. When the king heard what was read to him immediately he realized that the situation, despite his reformation was deviated far away from God’s original command to his people. There had to be done much, much more, “debris” to be removed, before the situation actually was restored.

It should also be clear that today again much debris has to be cleared. Today also many people must be brought back on the right track. Today too we need people who are willing to show the way back to God to the many stranded lost ‘sheep’.

2020 years ago, Jesus came on earth to show the way to God. As we ended the previous chapter by noting that he is the Only Way to God, many will still have to recognize who he is and should come to see it is not to glorify Jesus as their god, but that they should glorify the heavenly Father of Jesus as their God.

This academic year on our ecclesia site and here, we are more likely to present why we should believe that in Jesus Christ, as the sent son of God, we have received the most precious gift and why he is the only way to God. We will also continue to show that he really is that long promised Saviour, the Messiah and Kristos or Christ. We must be careful because there shall come a time that he will come back to judge the people. At those end-times we want to be included in the group that shall be allowed admittance to the Kingdom of God.

In ancient times, God had brought calamity upon Judah and Jerusalem, but He had also brought hope to many people who lived around the Jewish community who also got a chance to be justified again and to be allowed entrance into God’s Kingdom with a Great People of God .

Habakkuk may well with astonishment and dismay have seen how God’s people were as helpless fish. But Jesus foresaw the world of fishers of men. These would these fishermen can trump of Babylon, and in their nets caught fish or people can bring back to liveable waters.

The pride of Babel was hurt and became their fate. Babylon’s wide wall was razed to the ground and its high gates were burned with fire; so peoples made themselves weary for nothing and nations became tired before the fire, as there are today too many who are debilitating for nothing. (Jeremiah 51:58). 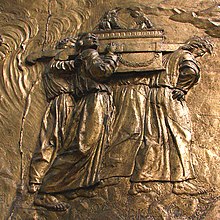 Transport of the Ark of the Covenant

Of the family of the king who had brought the Ark of the Covenant to Jerusalem and build a temple for true worship, 2020 years ago came a new king in the world. A king who will reign over us. This man of flesh and blood was given the authority by God to rule from Jerusalem.

As in previous years, men have tried all sorts of forms of government (or political systems), but non of those forms seemed to work. It has been found that it is very difficult to have a just ruler for all the citizens. Yet there is such promising one and it will come; Jesus Christ shall be the king of that Kingdom here on earth.

2 Samuel 23: 3 KJV The God of Israel said, the Rock of Israel spake to me, He that rules over men must be just, ruling in the fear of God. That man knew his heavenly Father very well and wished only to do His Will and not his own. He gave himself completely over to the Will of God. That is what is expected of us and what we have come to do also, becoming one with Christ as He is one with God.

The last prophet of the old times and Hebrew Scriptures, or Old Testament, foresaw the coming of Christ would bring a crisis among the people of Israel:

Malachi 3: 1-2 KJV Behold, I send my messenger, and he shall prepare the way before me; and shall suddenly come to His temple the Lord, whom ye seek, even the messenger of the covenant, whom ye delight in: behold, he cometh, saith the Lord of hosts. (2) But who may abide the day of His coming? And who shall stand when he appears? For he is like a refiner’s fire, and like fuller’s soap.

It is the God of gods or Host of hosts Who declares that His sent one shall come. For the prophet Malachi it was clear that a messenger of God (an angel) would bring Good Tidings. Though he wonders who shall bear him and questions who shall be ready.

Christ the King of Israel came and was hung on the torture stake. But that was not the end but the beginning of a new world. The world we also want to show on our sites.

Those who killed more prophets from God, also brought the prophet and teacher Jeshua (Jesus Christ) to his end. But his sacrificial death would bring a change for us because it opens the door to new life. For that reason, his birth 2020 years ago, is so important to us.

As there were infidels in Jesus and Paul their time, Paul also having been confronted with the unbelieving Jews of his time. Trying the Jews to understand their stubbornness and impenitence should today be a sign for several followers of Jesus, brothers and sisters in Christ, to warn people of the coming period so that they can prepare for the

“The day of wrath and revelation of the righteous judgment of God who will reward everyone according to his works” (Romans 2: 5).

For 2016-2017 therefore an important task is ready, laid aside, for those who love Jesus and want to come under his rule.

Redemption #7 Christ alive in the faithful