As mentioned, Jesus also possessed a human site and a human mind. That kept mainly in: conceding a tendency to give in to human desires, arising from what the Bible calls his “flesh”. It was this tendency which he had to overcome to triumph. He was born of Mary as any other human baby. When he spoke of the need to be born again (see Chapter 13, “The washing of regeneration) the scribe Nicodemus  understood him wrongly. He took that literally and asked, surprised

“How can a man be born when he is old? Can he enter the second time into his mother’s womb and be born? “

Jesus had assumed that it would be clear to Nicodemus that this was not meant literally. Yet millions of Christians believe that Jesus as an adult, even more so, as an existing eternal God, has entered into Mary’s womb to be born as an infant. The Bible knows nothing of such a remarkable event. There is no indication that his life did not began in Mary’s womb. Although he was a very intelligent child, he had to learn. Though God is omniscient and as such knows everything this son of God did not know anything at the beginning and had to learn everything. When he had learned everything from the village rabbi, he took on his first visit to the temple in Jerusalem in order to  further increase his knowledge of Scripture at the professors’ theological university “of his day  listening to the teachers and questioning them.

“And it came to pass, after three days they found him in the temple, sitting in the midst of the teachers, both hearing them, and asking them questions:” (Luke 2:46 ASV)

It taught him what awaited him as “suffering servant of the Lord”, described in a series of four or five prophecies in Isaiah. If he had been out God from eternity he had already possessed that knowledge.

The first of that series prophecies told him:

“1  Behold, my servant, whom I uphold; my chosen, in whom my soul delighteth: I have put my Spirit upon him; he will bring forth justice to the Gentiles. 2 He will not cry, nor lift up his voice, nor cause it to be heard in the street.” (Isaiah 42:1-2 ASV) 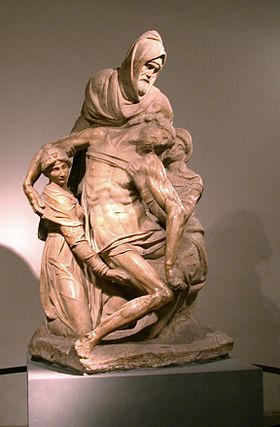 Nicodemus helping to take down Jesus’ body from the cross (Pietà, by Michelangelo)

That told him that he would have all the power of God’s Spirit, but he did not have to use that power to establish his dominion by force. Rather, he should go around preaching the word as a humble preacher. In the second prophecy is stated:

“But I said, I have labored in vain, I have spent my strength for nought and vanity; yet surely the justice [due] to me is with Jehovah, and my recompense with my God.” (Isaiah 49:4 ASV)

That had to teach him that the people would reject his preaching, but he nevertheless had to trust in God. The third prophecy says:

“I gave my back to the smiters, and my cheeks to them that plucked off the hair; I hid not my face from shame and spitting.” (Isaiah 50:6 ASV)

As such we can find a man who was to our transgressions spit at and wounded, bruised for our iniquities. The word of God tells us that nobody can see God an live and that man can do nothing to God, but we can see that Jesus did not hide himself and was seen by many who did a lot of things to him. Man can do God nothing. God can not die, but Jesus had to bear the stripes of the whipping and the nails going through his hands and feet, bringing him to his death at the wooden stake, giving himself as a guilt offering.

“I gave my back to the smiters, and my cheeks to them that plucked off the hair; I hid not my face from shame and spitting.” (Isaiah 50:6 ASV)

The text he came to know very well, he also very well understood how it reflected on him, who was sent by God.

That taught him that he would be mistreated for his preaching. The fourth prophecy says thus:

“But he was wounded for our transgressions, he was bruised for our iniquities; the chastisement of our peace was upon him; and with his stripes we are healed.” (Isaiah 53:5 ASV)

“Yet it pleased Jehovah to bruise him; he hath put him to grief: when thou shalt make his soul an offering for sin, he shall see [his] seed, he shall prolong his days, and the pleasure of Jehovah shall prosper in his hand.” (Isaiah 53:10 ASV)

That told him that the symbolism of the guilt offering was applied to him and that he would die for the sins of others. It also told him what kind of death that would be: death (pierced) on the piece of wood, probably the most terrible form of execution that man has invented ever. But finally it told him that God would resurrect him back from the dead and that others by his sacrificial death would live well; there he had to trust it. Finally, there is a prophecy, of which one is not sure it also belongs to this series. It says:

“The Spirit of the Lord Jehovah is upon me; because Jehovah hath anointed me to preach good tidings unto the meek; he hath sent me to bind up the broken-hearted, to proclaim liberty to the captives, and the opening [of the prison] to them that are bound;” (Isaiah 61:1 ASV)

We may find the sent one from God blessed with God’s Spirit being upon him, because the Most High God Jehovah had anointed him. It should be clear to us that Jesus was sent to bring good tidings to the meek, to bind up the brokenhearted, to proclaim to captives and to those in prison.

That taught Jesus what his task was: to preach the Gospel and liberate people from the prison of sin and from the treadmill of sin and death. That should stand him in mind for his work.

Once become an adult he had to pass the same test as Adam before him. That ordeal was even harder for him than for Adam, because he was at his baptism equipped with all what the Bible expresses as God’s strength, “anointed with the Holy Spirit“. It enabled him to reach for the kingdom with its own resources and strength that was promised him. But he had to the contrary, go the path of humility and suffering and wait patiently for God to give him the kingship. He had to learn to say:

Here once more we should come to see that Jesus is not God because when he would be God it would always be God His Will when Jesus wanted to do something. Though Jesus declares that it is not his will which has to be done but the Will of God.

Unlike Adam, he did not fail. The apostle Paul describes incisively in his letter to the church at Philippi. He writes:

“5 Have this mind in you, which was also in Christ Jesus: 6 who, existing in the form of God, counted not the being on an equality with God a thing to be grasped, 7 but emptied himself, taking the form of a servant, being made in the likeness of men; 8 and being found in fashion as a man, he humbled himself, becoming obedient [even] unto death, yea, the death of the cross.” (Philippians 2:5-8 ASV)

This passage is full of references to the Old Testament. Jesus was “in the form of God.” This refers to Adam who was created in the “image of God” (Genesis 1:27). He having his equality with God “does not consider it robbery”. Again referring to Adam, who tried reaching for the forbidden fruit to be “like God” (Genesis 3: 5). He Himself ‘emptied’ himself. Which refers to the “fourth prophecy of the servant of the Lord” where we read that He “poured out his life (same basic meaning) in death.” He has “took on the form of a servant”. That means that he voluntarily took on the the role assigned to him in the series of prophecies concerning the suffering servant of the Lord: He’s gone the way of the cross, rather than using his power. Who at this point reads a modern translation sees how modern translators struggle with the fact that here is written that Jesus being equal with God is not “considered a robbery,” while he already was equal to God in their views. A round of contemporary translations shows how creative, but not very accurate text this is dissolved.

In contemporary Dutch Bibles you may find (translated to English)

“For though he had God’s stature and his equality with God did not have to consider robbery  … (!)”

“He had the form of God, but did not jealously clung to his equality with God.”

“Who, though He was God Himself has not clung to his divine right.”

Apparently modern translators did not hesitate to replace the actual text of the Bible by what they believe the apostle had to write! But let us return to the literal and original text.

Paul goes on to describe us what is the result:

“Wherefore also God highly exalted him, and gave unto him the name which is above every name;” (Philippians 2:9 ASV)

It was because Jesus obeyed God that he was highly exalted by God. Again when Jesus would be God he then would already been above all – Almighty Jehovah God always being the Most High – , though we learn that at first Jesus was lower than angels.

“Thou madest him a little lower than the angels; Thou crownedst him with glory and honor, And didst set him over the works of thy hands:” (Hebrews 2:7 ASV)

“But we behold him who hath been made a little lower than the angels, [even] Jesus, because of the suffering of death crowned with glory and honor, that by the grace of God he should taste of death for every [man].” (Hebrews 2:9 ASV)

This may, as some theologians admit, only mean that Jesus got a higher position than before his crucifixion after his resurrection, and that it is the Father who gave him that position. But there has been no room for the idea that he from eternity would be alike to the Father. He succeeded where Adam failed, and that way he could be the saviour. Paul emphasizes this when he calls him “the second Adam” (1 Cor. 15:45)

“So also it is written, The first man Adam became a living soul. The last Adam [became] a life-giving spirit.” (1 Corinthians 15:45 ASV)

Not about personal salvation but about a bigger Plan

32 reacties op The saviour Jesus his human side