The Way of God or the way of the world?

The example of Abraham, compared with the people at Babel, shows the direction to be followed.

From the very start of our Bible mankind is presented with a simple choice: to walk towards God or to walk away from Him.
As early as Genesis 3 when Adam and Eve were expelled from the Garden of Eden, the way back to God (or the way back to the tree of life) was not permanently eradicated, rather it was ‘guarded’ or ‘preserved’ (Genesis 3:24).
Therefore while all mankind might have sinned and fallen short of the glory of God, a way back to Him has been preserved through the saving work of His Son, the Lord Jesus Christ.

In our lives we have a daily choice either to walk towards God and in His ways, or to walk in the way of the world.
It is interesting, and important, that the way back to the tree of life is on the east of the garden of Eden:

“He placed at the east of the garden of Eden Cherubims … to keep the way of the tree of life” (Genesis 3:24).

In other words, in order to get back to the tree of life, a man or woman would need to walk in a westerly direction (because walking into a garden through an entrance at its eastern edge requires one to walk in a westerly direction through that entrance). This is a pattern which holds true in the tabernacle, where one had to walk in a westerly direction to enter the tabernacle, the holy place and the most holy place (Exodus 27:13,14).
It also holds true in Ezekiel’s temple where, again, to walk towards God requires one to walk in a westerly direction through a gate situated at the east side (Ezekiel 43:1,4).
So in Genesis 3, the seemingly i n s i g n i fi c a n t  d e t a i l  o f  the whereabouts of the way back to the tree of life is actually an important piece of information which helps to shed light on some other accounts in the book of Genesis.
Chapters 11 and 12 contain one of the clearest examples in scripture of the difference between walking in the way of God, towards Him, and walking in the way of the world. The contrast is between “the whole earth” in Genesis 11 and Abraham in chapter 12.
Genesis 11 speaks of a time in which the entire population of the world was walking as one “from the east” (Genesis 11:2). In fact, the Hebrew word is better rendered “eastward”, as it is translated in chapter 13:14, when God tells Abraham to look “northward, and southward, and eastward, and westward”. Having learned in Genesis 3 that the way back to God, to life, requires one to travel in a westerly direction, we should immediately be wary when we read of people travelling east.
If the direction of travel of these people wasn’t enough to alert us to the ungodliness of their ways, we don’t need to read on much further in the record. The people were clearly important in their own eyes and had little or no time for God – the word “us” appears five times in verses 3 and 4. The focus of this group of people, in other words, was entirely on themselves and not God.
Their self-importance and disregard for God is just the start of it. In what may quite possibly have been a bid to usurp the authority of God, they go about their own process of creation:

they say as they set out to build a city and a tower that reaches to heaven. Their choice of words jars distinctly with the words of God at creation,

In contrast to God’s creation, the people’s creative efforts in chapter 11 have a hollow motivation: 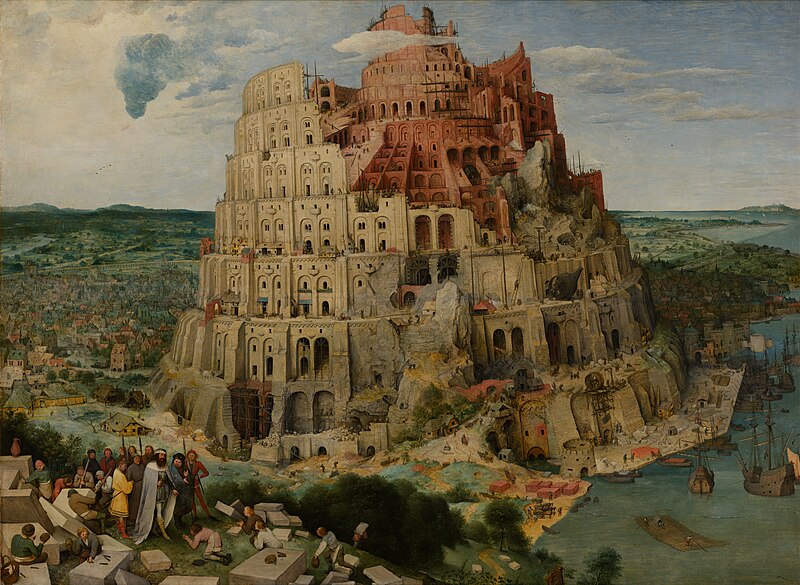 Rather than honouring God as their creator, they are instead focused on glorifying themselves.

The reason for the building of the tower “whose top may reach unto heaven” arose from an additional motivation: to prevent the people from being “scattered abroad upon the face of the whole earth”.

When we are introduced to this group of people at the start of the chapter they are moving as one, in one direction, with one language, and one speech. In an apparent contravention of the commandments of God in 1:28 and 9:1 to “replenish the earth”, these people are insistent on remaining together. They thought that building a very high structure that could be seen for miles around would assist them with that (after all, how can you be lost when you can always see a tower whose top reaches up to heaven?). What follows next is a salutary lesson for those who would go in the way of the world and seek to glorify themselves rather than glorify God.
Having observed the people’s ambitions to build upwards, God perhaps mimics their language, saying,

It is ironic that while mankind tries to build upwards to heaven, and by implication to elevate themselves to the position of God, God comes down. Having observed the ambitions of mankind, God resolves to “confound their language” (verse 7) and scatter them abroad (verse 8). In other words, the very thing this group of people was trying to prevent took place. The lesson is clear.

Following the way of the world rather than the way of God will always end in confusion, and ultimately death.

It can be easy, however, to find ourselves following the way of the world if we are not careful.
The world and its ways can be enticing, particularly when everyone around us is going in that direction. Walking in the opposite direction is difficult and can make us quite conspicuous.
It is encouraging then to have an example in the very next chapter of Genesis, of a man who was prepared to do just that – to walk in the opposite direction to the rest of the world, to walk in God’s way.
The early verses of Genesis 12 stand in stark contrast to chapter 11, as if the inspired word is saying,

‘having seen the way of the world and where it leads, now let’s see what happens if you go in God’s way’.

In Genesis 12, God appears to Abraham for the first time and tells him to go to a land that God would show him. Unlike the plain in the land of Shinar which the people of the world appear to have stumbled u p o n  a s they wandered aimlessly, Abraham was destined for a very specific place – the promised land.

As if we needed to check, the direction in which Abraham had to travel in order to get from Ur of the Chaldees to the land of Canaan was due west, as a quick look at the maps at the back of a Bible shows clearly. When we layer chapters 11 and 12 on top of one another, we get a vivid picture of the entire world walking east, but faithful Abraham walking in completely the opposite direction.
If we are ever worried about going in a different direction from those in the world around us, Abraham shows us that it can be done.
The end of the way of the world, as can be seen in chapter 11, is only confusion and a scattering of the people. The way of God has quite a different ending.

“In thee shall all families of the earth be blessed” (Genesis 12:3),

God promises Abraham, if he will follow God’s way. In other words, while the people in chapter 11 tried to stick together and make some kind of permanent abode in the land of Shinar, and ended up being scattered abroad (and thus becoming very distinct sets of people), God makes promises to Abraham which are for the benefit of all families of the earth.
Or, put more simply, to follow the way of God leads to blessings; the way of the world leads to the very opposite.

As mentioned earlier, the people of the world were attempting to make a name for themselves through their building efforts. How telling then, that God promises Abraham that if he were to walk in His ways, God would make his name great (12:2). Man’s glory is temporary and fleeting (“all flesh is as grass, and all the glory of man as the flower of grass. The grass withereth, and the flower thereof falleth away” – 1 Peter 1:24), but those who walk in God’s way have the hope of “a far more exceeding and eternal weight of glory” (2 Corinthians 4:17).

So at the end of this comparison of the way of the world and the way of God, we must ask ourselves which way we are to pursue. Do we head in an easterly direction with the rest of the world, or do we head west with faithful Abraham?

We should, of course, take our cue from the Lord Jesus, who not only walked in God’s way, but became himself the way by which a man or woman comes to God. As he said:

The way back to God with all the blessings it affords, guarded for thousands of years since Genesis 3, has been opened to us through the sacrifice of the Lord, which we commemorate in the bread and the wine. The correct choice is obvious.

Reason to preach #5 Trained to do it God’s way

2 reacties op The Way of God or the way of the world?