We can speak about a person being divine or looking up at some one. In ancient times people spoke about highly placed persons in honour and with respect for their position and called them “god“. As such we hear about angels being called god, but also people, like Moses, Pharaoh, or mythical figures like Baal, Zeus, Apollo and others, even today we hear people calling their idols gods, like Maradonna, George Clooney, a.o., but nobody is going to think they are the real True God divine Creator of heaven and earth.

Too many people do forget that “god” is not a name but a title, given to higher placed people or to beings, people wanted to worship, which are not The God Almighty, the divine Creator. 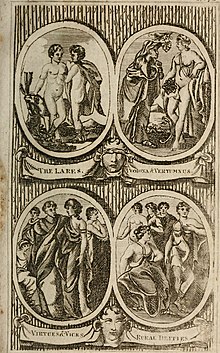 Illustration of various deities associated with polytheistic pantheons from William Cooke’s The Pantheon – or, fabulous history of the heathen gods, goddesses, heroes, &c.

Concerning Christ Jesus, we must know that he has taken a very special place in the pantheon of gods. Born from the tribe of King David Jeshua, who is better known as Jesus, was human as to the substance of which he was made (man of flesh and blood); but divine as to the source from which he came; the Spirit from which he derived his wisdom; and the pattern of the character which he possessed.

In the Scriptures we do find about him, that he was sent by God:

Forasmuch then as the children are partakers of flesh and blood, he also himself likewise took part of the same; that through death he might destroy him that had the power of death, that is, the devil; (Heb. 2:14).

And the child grew, and waxed strong in spirit, filled with wisdom: and the grace of God was upon him. (Luke 2:40).

And the Word was made flesh, and dwelt among us, (and we beheld his glory, the glory as of the only begotten of the Father,) full of grace and truth. (John 1:14

Jeshua, or Jesus was already promised by the Almighty God, in the garden of Eden, but only came into existence many centuries later, when he was born in 4 BCE. Being created in a special way, his mother not having had sex with a man, got pregnant by the Power of God (the Holy Spirit), made it that there is a special connection between Jesus and the Father that does not exist between God and other men.

Jesus and the Father were one by the Spirit, which, proceeding from the Father, embraced them both. God was thus in Christ, and Christ was thus the manifestation of God: which things cannot be said of any other man.

Jesus saith unto him, Have I been so long time with you, and yet hast thou not known me, Philip? he that hath seen me hath seen the Father; and how sayest thou then, Shew us the Father? Believest thou not that I am in the Father, and the Father in me? the words that I speak unto you I speak not of myself: but the Father that dwelleth in me, he doeth the works. (John 14:9-10).

To wit, that God was in Christ, reconciling the world unto himself, not imputing their trespasses unto them; and hath committed unto us the word of reconciliation. (2 Cor. 5:19).

And without controversy great is the mystery of godliness: God was manifest in the flesh, justified in the Spirit, seen of angels, preached unto the Gentiles, believed on in the world, received up into glory. (1 Tim. 3:16)

In this world we do find in Christendom the majority taking Jesus as their god, thinking he is an incarnated god. Such an incarnation would be an act of a happening which God does not like at all, so why would He do it with Himself? God coming to earth would also make God to be a very strange Being not to trust, because God knows everything, though Christ Jesus said he did not know when he would be returning (something very important) nor who would be seated next to him. (In case Jesus is God he would not have told the truth or would not be an all-knowing god). In Scriptures is also said God does not tell lies and that man cannot see God and live, though many saw Jesus and did not die. Jesus also told he can not do anything without God who is his heavenly Father. From Scriptures we also know that God cannot die, so when Jesus would be God than He would have faked His death, which also would have no use at all, and certainly not when we are still suffering after such a debacle or theatrical scene.

If Jesus is God why would he not tell so? We can ask

Was Jesus a God co-equally and co-eternally distinct from the Father, as Trinitarianism teaches?

The man Christ Jesus, begotten of the Father and endowed immeasurably with His spirit, was distinct from the Father, though one with Him in the sense expressed in the last answer. But as to co-equality and co-eternity, these are ideas that owe their existence to the speculations and disputations of Church theologians in the third and fourth centuries. They do not belong to the New Testament system of doctrine concerning Christ. This system teaches that the divinity in Christ was the Father who fills heaven and earth by His Spirit. Christ disowned co-equality with the Father; and co-eternity is impossible in a son.

“Before the mountains were brought forth, or ever thou hadst formed the earth and the world, even from everlasting to everlasting, thou art God.” (Ps 90:2)

“But the LORD {Jehovah} is the true God, he is the living God, and an everlasting king: at his wrath the earth shall tremble, and the nations shall not be able to abide his indignation. {true … : Heb. God of truth } {living God: Heb. living Gods } {everlasting … : Heb. king of eternity } (Jer 10:10)

“No man hath seen God at any time; the only begotten Son, which is in the bosom of the Father, he hath declared him.” (Joh 1:18)

I am one that bear witness of myself, and the Father that sent me beareth witness of me. (John 8:18).

Ye have heard how I said unto you, I go away, and come again unto you. If ye loved me, ye would rejoice, because I said, I go unto the Father: for my Father is greater than I. (John 14:28).

And when all things shall be subdued unto him, then shall the Son also himself be subject unto him that put all things under him, that God may be all in all. (1 Cor. 15:28).

Preceding: Concerning Christ #1 A god or the God, a son of man and son of God