God’s people had to spend a lot of time in the desert because their own doing. That time over there bringing to them the experience in the desert serves not only as a test, but also served above all as instruction. It had to teach the people to trust God. Moses says in retrospect:

Deuteronomy 8:3 The Scriptures 1998+ (3) “And He humbled you, and let you suffer hunger, and fed you with manna which you did not know nor did your fathers know, to make you know that man does not live by bread alone, but by every Word that comes from the mouth of יהוה {Jehovah}. Footnote: Messiah quotes this in Mt. 4:4 and in Lk. 4:4. 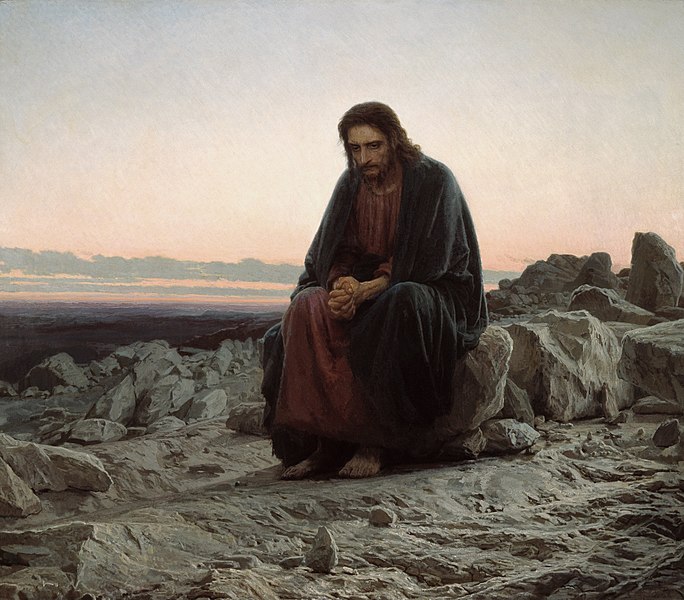 Christ in the Wilderness – 1872 Ivan Kramskoy

They like we have to be humbled to make us know that man does not live by bread alone, but that we live by every word from God’s mouth. This tells us that they were subjected to pains to teach them, to educate them to become better people. That’s the way God relates to humans to perfect them. It means, among other things, that God is constantly with them. That is the reason Jesus was tempted in the wilderness, where hunger was one part of his ordeal. And it is not without significance that he answered this challenge with  quoting the above words of Deuteronomy:

It is the Most High Elohim Who provides His Word for our instruction and guidance. By every thing which God is pleased to appoint we can continue our life and can feel how God moulds us.

God is actively pursuing the perfection of people. But not only of individuals: we have already seen that he was busy in the desert of Sinai with a whole nation. And its significance went beyond the national existence of the nation. Because it was out of the nation that the Messiah, the Saviour would be born.

God is busy with his entire Creation. More than six centuries before the Saviour was born was already announced his arrival by prophets like Isaiah and Micah. And when he was born the scribes were able to mention even the place of birth to King Herod without hesitation (Matthew 2: 4-6). When Jesus, after his experience in the desert began to preach, he could say:

When he had finished his work and his disciples would depart he pointed to new stages in God’s plan when people would be able to hear of fightings, lots of unrest and when nation shall rise against nation, and reign against reign, whilst there shall be great earthquakes in various places, and scarcities of food and deadly diseases, and people would be able to see or hear of horrors, and great signs from heaven (Luke chapter 21):

Luke 21:24 The Scriptures 1998+ (24) “And they shall fall by the edge of the sword, and be led away captive into all nations. And Yerushalayim shall be trampled underfoot by the gentiles until the times of the gentiles are filled.

When Jerusalem will be trampled by Gentiles until the times of the Gentiles are fulfilled (Luke 21:24) we should take note of the warning:

Luke 21:34 The Scriptures 1998+ (34) “And take heed to yourselves, lest your hearts be weighed down by gluttony, and drunkenness, and worries of this life, and that day come on you suddenly.

How much does our society wants to take heed to itself, and how much shall we be prepared for that day [the day of Jesus his return] which will not come upon us suddenly like a snare. (verse 34).
He compared the advent of “that day” with the arrival of summer (verses 29-32). As certainly as the coming of the seasons, the arrival of the stages in God’s plan shall take place. And though no one knows when the time exactly will come, by God the time is already certain:

Jesus who is the son of God, in case he would have been God, would have known, like he would have known who was going to sit next to him. But not being God he does not know such things which belong only to God and God His Plan. Not even the angels of heaven know it. Jesus who was a man of flesh and blood knew also that for people it is not to know times or seasons which the Father has put in His own account. But Jesus and the Holy Scriptures tell us how God has a Plan with mankind and that we may be sure the Father does have His plans ready.

Acts 1:7 The Scriptures 1998+ (7) And He said to them, “It is not for you to know times or seasons which the Father has put in His own authority.

Since creation a lot has happened. Also after the birth and death of the Messiah, Jesus Christ a lot has happened. And we are not yet at the end of the track.
We should not be surprised some strange things come over us. In the meantime new trials apply, to further advancement of God’s children:

1 Peter 4:12 The Scriptures 1998+ (12) Beloved ones, do not be surprised at the fiery trial that is coming upon you, to try you, as though some unusual matter has befallen you,

But continual consolation applies. We have the hope in the Kristos, Jeshua the Messiah (Jesus Christ) that the God of all grace will, after a short period of suffering, perfect, establish, strengthen, and settle us.

1 Peter 5:10 The Scriptures 1998+ (10) And the Elohim of all favour, who called you to His everlasting esteem by Messiah יהושע {Jehsua}, after you have suffered a while, Himself perfect, establish, strengthen, and settle you.

And all according to God’s plan established from the start:

Ephesians 1:4 The Scriptures 1998+ (4) even as He chose us in Him before the foundation of the world, that we should be set-apart and blameless before Him in love,1 Footnote: 12 Thess. 2:13.

Divine Plan and an Imperfect creation