A look at the Failing man

In the article “De Falende mens (the Failing man)” we discuss how man evolved from the earliest stages in the Garden of Eden and the Flood (the antediluvian period) and what happened afterwards in the postdiluvian period.

Modern ideologies usually have the tendency to go out of the inherent good in man. However, the Bible records the man as a being that does not succeed on its own strength to become perfect. He needs salvation.

Outside Biblical ideologies (think e.g. Humanism) have like some non-Christian religions, the principle that man is inherently good and only some adverse influences bring him on the wrong path.
To achieve an ideal world (an ideally perfect place), a ‘utopia‘ such as the writer Thomas More the imaginary world once called (from the Greek ou = none, and topos = place) we need only create the right conditions and make the appropriate structure.
In fact, already Plato has engaged himself in his writings ‘the republic’ in such an ideal society. And communism was, for instance strongly founded on such ideas.
However, we have all seen that it is hopelessly succumbed to the abuse of power and corruption of those who were in control there.

Apparently there is something wrong with that optimistic image of man, though of course there are enough examples of people who have dedicated their lives to the good of others. But those are more the exceptions than the rule (that’s why they are always so admired). The Bible has to tell a different story over man .

The Bible tells us that God created man as the last of his acts of creation. Apparently creation was primarily intended as biotope, habitat (living quarters). Each time we are told in Genesis 1:

“And God saw that it was good.”

And at the end of creation, we read:

“And God saw everything that He had made, and behold, it was very good.”

So we must assume that man was created in principle ‘good’.

“I have found, that God made man upright,”

and then add to it,

“but they have sought out many schemes” (Ecclesiastes 7:29). Man Made in the Image of God, as in Genesis 1:26 to 2:3, illustration from a Bible card published 1906 by the Providence Lithograph Company (Photo credit: Wikipedia)

It locates in Ecclesiastes, among others, an explanation for the many injustices in the world, where man has it continually in hand. Man was well made but he was not ‘finished’. He had to go through a process of perfection; and in that process lots of things can go wrong, and that was and is what happens.

According to Genesis, God had no small plans with man:

The Elohim, Most High God made man in His own image, after His likeness and gave him dominion over everything on earth and God blessed them. And God wanted them to be fruitful and multiply, filling the earth and subduing it (Genesis 1:28-29)

But once God had created man there was no question yet of dominion over the earth. Instead, man gets a piece of earth, the Garden of Eden ” to beautify and to keep it” (Genesis 2:15). He also receives rules that he has to adhere, such as not eating from a certain tree. So he gets a task and a behest that mainly reflects the small of the more lofty tasks that awaits him. But he is also tested for his obedience. He must as it were, go through a trial period, to see if he can handle his lofty task. We find this principle illustrated in one of Jesus’ parables. In it Jesus speaks of a ‘gentleman’ who will be a time absent and leaves out certain tasks for his slaves. When he comes back he is holding accounts with them, and if they acted in the good way his judgement is:

“Well done, good servant; because thou hast been faithful in a very little, have authority over ten cities “(Luke 19:17). 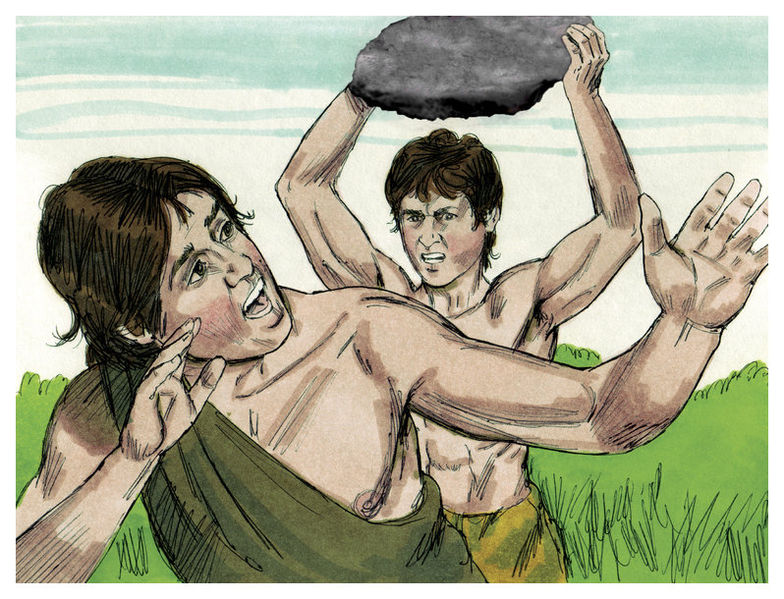 The first man failed however. On a suggestion from the outside he tried to faster achieve the likeness of God. He tried to cut off a piece, trying to become  “as God” by just doing what was forbidden. That was a fatal mistake, but not unexpected. The tendency to go against God was manifest in the human innate. Because with the next generation it was no better, on the contrary.
When the eldest son ended up sucked in a situation where he had to fear that he also could well lose the promise of a world domination,  his ‘solution’ to it he choose wrongly to murder his brother and rival.
And several generations later it had already come so far that someone boasted:

It was obviously all just got to answer wounded pride with murder. It’s like you open the newspaper today.

Man got time to adjust himself to the statutes of God and to act rightly to the call of the Elohim to live righteously. At one point in history it was too late and people had to learn their lesson it was better to listen to God and His prophets. – The Great Flood, by anonymous painter, The vom Rath bequest, Rijksmuseum Amsterdam

But when God made a radical end to the world through the flood  and with an extremely righteous man made a new beginning, it went wrong again in no time.
The men built a tower “whose top would reach unto heaven” as a challenge to the God who commanded them to serve Him in humility.

Obviously we can not ascribe the evil in the world solely to an unfortunate slip of our first ancestor. The rest of the Old Testament is characterized by constant struggle and war. It has been complained that the Bible contains so much injustice and so much bloodshed. But that is because the Bible depicts man as he is. And the human being is inclined to climb over the backs of his fellow men when he is on his way to power. The prophet Jeremiah puts it this way:

The heart is deceitful (insidious, malicious) above all things [the Bible says the heart stands for the deepest essence of man, and not like for many of us for having emotions], , yes, it is depraved;and desperately wicked: who can know it? {Jeremiah 17:9}

11 reacties op A look at the Failing man